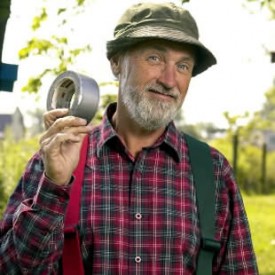 Before I’d turned sixteen my dad bought me a car. Now, I wasn’t one of those rich kids whose parents spoiled me with a brand new car. No, no, this car was not a status symbol to cruise around the high school parking lot. It was merely a mode of transportation. At least, that was usually the idea—that it would get me from one place to the next. This didn’t always work out.

My first car back in 1993 was a ten-year-old Ford Escort. It had come off the floor of the factory a decade prior with absolutely no bells or whistles. I take that back. It did feature a sunroof, which is not always a perk when driving in the summer. In Arizona most people employ those windshield shades when parking for an extended period of time—like five minutes or more. I’d wished I’d had one for the sunroof. Actually, what I’d really wished for was air conditioning, a dire need when driving from school at 2:30 in the afternoon. (Cue desolate territorial desert music and image of cow’s skull.)

(As a side note, I remember when our air conditioning in the car went out just a year or so into our living here in Ohio. A thousand dollars to fix it wasn’t worth it to me, not in these so-called summers.)

A ten-year-old car wouldn’t have been so bad—I own two—except this one broke down quite often. Thankfully, my dad was pretty knowledgeable about fixing cars. Dad could have been an engineer. He loved to think about how things worked. As a civilian, he worked at the Marine Corps Air Station in Yuma as a computer flight simulation technician. Pilots from around the world came to Yuma to train on the machines he was constantly fixing—much like my red Escort. (Actually, the car did seem like a plane at times, considering the alignment was so bad, making steady steering nearly impossible. We called it a “death trap” for good reason. I replaced the front tires with used ones often.)

Not only did Dad love to consider the mechanics of something, but also he liked to teach us, although he never found a student in me. I absolutely hated working on cars and learning about them. I didn’t care to know how anything worked. I just wanted it to work. And when it didn’t, I became very impatient. A car that didn’t run was a challenge to my father. He kept an old ’69 Chevy truck around simply to have something to work on. (Ironically, I find myself in a similar situation. We have a big ’97 Chevy van and a ’95 Plymouth minivan, and I’m trying to figure out which to keep; it’s like a crap shoot, wondering which will run longer. It might be good to keep both: to have a backup. I’m just not sure which is the backup.)

Whether it was cars or electrical wiring or plumbing, Dad tried to teach me. But for a long time I didn’t listen. The other day I was thinking about him. (In case you were unaware, he died suddenly last September.) I was doing some repairs at our house in Toledo and remembering his helping me with many project on our old house. Since becoming a homeowner six-plus years ago, I’ve deeply regret not having paid attention as a teenager to his teaching. But I look in my toolbox and realize that many of my tools were purchased by my dad. Whenever my parents would come to visit us in Toledo, he was compelled to make sure I had tools I needed.

Maybe because I wish he were still around to teach me, I’ve increasingly desired to know how things work. Thankfully, I discovered some very informative podcasts and a handy website several months back: howstuffworks.com. So many things my dad tried to teach me I can now learn by reading articles or listening to various podcasts.

We started with the podcasts. Lindsay and Jacque and I love listening to “Stuff You Missed in History Class,” which feature 15-20 minute episodes highlighting moments and people in history, many of which I “missed in history class.” They like one of the hosts because her voice reminds them of their aunt Becky. I’ve liked “Tech Stuff,” where I’ve learned about WIFI, microwave ovens, and how to be productive online. For ladies (and men too), there’s “Stuff Mom Never Told You”: what constitutes an eating disorder, are nail salons silent killers? My favorite might be the simple “Stuff You Should Know”: who owns the oceans, how Murphy’s Law works, how Ponzi Schemes work, are stupid people happier? The girls’ favorite episode is about Twinkies. (Did you know they used to be made with real flour, sugar, and eggs?) There are others too that I plan to get to.

Whether we listen together or I listen by myself on my drive to the office, we learn a lot about simple things that are worth knowing. As a disclaimer, make sure to preview any questionable podcasts before sharing them with your kids. (That’s just part of being a parent, right? The Twinkies episode was safe.) The things I’ve learned haven’t just made me smarter; I’ve started using some of the things they’ve talked about, like the online productivity or how to prevent receiving junk mail.

Dad would be proud that I’m aiming to be a lifelong learner. I’ve added howstuffworks.com to my toolbox filled with all the other tools he bought me.

A sketch on The Red Green Show features Steve Smith, who reminds me a lot of Dad, a 50-something man who makes home repairs primarily with duct tape. (Dad used RTV and tie wraps for most repairs.) At the end of each five-minute sketch, Red Green summarizes: “If the women don’t find you handsome, they should at least find you handy.” As I get older and my boyish good looks start to fade (chuckle, chuckle), to keep Cindy around I’d do well to get handier.

One thought on “If the women don’t find you handsome …”