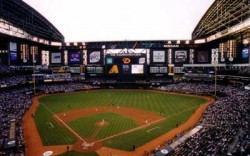 My first baseball game was a Spring Training matchup in Yuma, Arizona, back when the San Diego Padres trained in my hometown. I don’t remember the game that much, probably because I would later spend many evenings there at Ray Kroc Stadium, where my older brother Steve played Babe Ruth baseball.

I’m not sure why I didn’t follow in both of my older brothers’ Little League footsteps. I think I remember being afraid of the ball. Could you blame me? I mean, a nine-year-old kid stepping into the box against another kid who at that age couldn’t throw very hard but lacked the control to keep from throwing at my head.

I would go on to play tennis, this time taking my brothers’ lead. Both had abandoned the hard ball for a softer, felt one, which was more agreeable to me. Though it is somewhat spongy, it can still sting. In a high school match, my doubles partner stood in the back to serve and I hunched near the net, ready to smash our opponent’s return of serve. Instead of crushing the ball into the service court opposite me, he planted it squarely between my shoulders. I’m sure it hurt, but I remember more being annoyed.

Build It And They Will Come

I didn’t care much for baseball for a long time until a franchise landed in Arizona. Even now, I’m not sure why the team three hours away attracted me. Perhaps there was something enthralling about Diamondbacks purple and teal, which I think was supposed to represent purple sunsets and desert turquoise. (Thankfully, they’ve since changed to a “Sedona red” hue.)

Maybe it was the idea of their stadium, one of the first that featured a retractable roof. As a kid I remember constantly being yelled at for leaving the door open while the air conditioner labored to cool us in our 110+ degree summers. While at a June game on a 90-degree night at the former Bank One Ballpark, I noticed the roof wide open, though the air conditioner pumped away. Hardly environmentally conscious then, I remember thinking, Wow! No one’s yelling, “I’m not gonna tell you again. Close that roof; you’re letting the cold air out!” or “Stay in or stay out!”

I recall a commercial touting Arizona’s new ballpark that showed manager Buck Showalter conversing with his bench coach about that night’s opposing starter. The scouting report said he didn’t like pitching in the cold. The next scene shows a frigid stadium with fans in parkas—where anyone living in the desert found those, I don’t know—and icicles hanging from the brim of the pitcher’s cap and somewhere electricity meters spinning like airplane propellers.

We took Lindsay to her first game when she was not yet one. I’d been listening at work to a local radio station that regularly gave away Diamondbacks tickets to the 4th or 7th or whatever caller. I called in and answered correctly that it was Tony Womack who hit the game winner the night before. After work, I stopped by the station and picked up two tickets, a hotel voucher, and some meal money. That was their second season, when I’d hoped to see Randy Johnson pitch. Sadly, I never did see the likely first-ballot Hall of Famer.

Jacque’s first game was also at Bank One Ballpark when some friends of ours caravanned to Phoenix to take in a September game. Just three years as a franchise and the Diamondbacks were already in contention for a division title. That’s what money can buy, just as it would a year later when they’d win it all—in purple and teal—from the evil Yankees. By then we’d moved to Toledo.

I’ve been to some Major League games here in the Midwest: a couple in Cleveland and several in Detroit. The Tiger’s farm team, the AAA Mud Hens, became a favorite in our home. I spent a few seasons working for a private company that collects data on minor league players. I went to about 25 games each season. Most of the time it was great: gorgeous weather, free ticket, great seat. Except, I was paid the equivalent of minimum wage, and some of those April games were like Lambeau Field. I remember one such game being called after three or four innings due to snow.

My girls weren’t always fans. I remember several years ago a game when Lindsay and Jacque, the cotton candy no longer dissolving sweetly on their tongues, grew bored and restless. One of them—I don’t want to try to recollect which—said on the drive home something that broke my heart: “Daddy, we don’t like baseball. We don’t want to go anymore.” I thought then I needed a boy.

The girls grew to like going to baseball games. I’d take both of them with me, though separately, to a game I was working and treat them to hotdogs and ice cream. For them, it was a date with Daddy. For me, it was thrilling to share with them something I love. Yeah, they like baseball a little now, and, though initially skeptical, they really enjoyed the movie The Sandlot.

Even Tommy Lasorda wouldn’t eat spaghetti at the ballpark

The girls knew I followed the D-Backs online, where I often watched my out-of-market team the following day, instead of staying up late for the West Coast games. A couple years back we were in Arizona vacationing and visiting family in June. Cindy had flown home earlier, and the girls and I had driven to Phoenix from Yuma on a Monday night for an early Tuesday flight. I knew the D-Backs were home, and I thought the girls would love to see Daddy’s team. The Mud Hens were nice, but this was my team.

We checked in to a hotel near the airport in downtown Phoenix, where Chase Field is located. (Chase bought out Bank One.) “Let’s go get something to eat,” I said. Jacque noticed the sign first, to which I said, “Yeah, let’s eat at the ballpark.” Neither seemed as delighted as I’d anticipated. Jacque said she was hot—a condition she’d been compelled to share constantly the previous two weeks. She didn’t believe the stadium was air conditioned and quite comfortable inside. Lindsay was not up for a hot dog, having a hankering for spaghetti instead.

Once inside, they brightened when they saw how big it was in comparison to Fifth Third Field in Toledo. (Chase is a bigger bank, I guess.) Lindsay seemed to enjoy her hot dog, and at some point Jacque nuzzled close to me to get warm. A stop at the team shop for some D-Backs apparel and a win by the men in Sedona red made for a great night.

Last Saturday we took Micah to his first game, compliments of some friends of ours. It was looking like rain would wash out his first experience—I should say, mine. But threatening clouds in Cincinnati held back as we took in the sights from some fantastic seats behind the Red’s first-base dugout. So close, in fact, I was vigilant the entire time for fouls in our direction. I instructed the girls, “Watch out especially with right-handed batters. If they’re late on a swing, that ball could come screaming right at us.” (Mama Hen was nervous the entire time.) Funny, taking on the Reds were the Padres.

For a few innings, Micah seemed content in the baby carrier strapped to my chest. While I shared bits of the bun with him, Cindy had to feed me my brat, onions and peppers falling like foul pop ups. (Nice simile, eh?)

Though we didn’t get any foul balls (at our proximity one could have maimed us) or buy any souvenirs (why would we want Reds stuff?!), I brought home the memory of my son’s first game. He won’t remember it, but I’ll never forget. Besides, I have this snazzy certificate to commemorate the event.

One thought on “A Boy’s First Game”