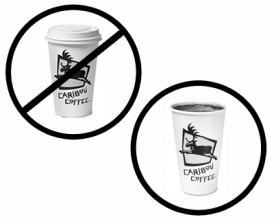 I don’t like lids on coffee cups. For one thing, they can be faulty, like the one Kramer had when he spilled a hot latte on himself in a movie theater. There’s really nothing that can provide the security you’re looking for in a coffee cup lid anyhow. I do, however, have a travel mug I received as a gift a few years ago. It looks like you could run it over with a backhoe and your coffee would still be nice and secure and hot.

There are two things I don’t like about coffee cup lids. First, that initial sip is a tricky one. It’s hard to assess the temperature, so I often find my first attempts involve simply inhaling the fumes. Fumes? Is that right? I hated chemistry.

The other thing about lids—and travel mugs—is they don’t allow you to breathe in the aroma. I did a little research, not much, though, because I don’t like science or anatomy or whatever this subject matter is. It’s said that almost 90% of what we perceive as taste actually comes through our sense of smell. That’s why when I get a cold and my nose is stuffy I usually lose a few pounds, since I can’t taste anything.

I used to frequent coffeehouses throughout Toledo and I’d almost always bring in my own coffee mug for the baristas to fill up. They applauded my green-mindedness in not wasting a paper cup. Really, I just prefer not to drink out of paper, plastic, or the worst: Styrofoam. You shouldn’t be able to chew your cup. Glass, porcelain, or even clay is the way to go. The mug has to be just right, though, to get your nose in there without the danger of drowning. I like a pronounced lip that I can wrap mine around. The handle has to have the right feel too.

You may think I’m joking, but ask my girls. I was on a quest for a while for the right mug for my office. See, I received a Keurig brewer as a gift last fall, and I altogether love it. Right in my office, I can make single servings of coffee that taste pretty close to what I can get in the store. (Now if I could only get that coffee-house smell of grinded beans and espresso. Maybe Fabreze makes an exotic scent like that.) The Keurig K-cups are rather small, so my 16-ounce tried-and-true mug I’ve had for 10+ years regrettably doesn’t work. You can’t put 8 ounces of coffee in a mug twice the size. Again, you won’t smell it properly.

Back to my hunt. If there was even the remote possibility of finding the right mug at a store we happened upon, Lindsay and Jacque, who often accompanied me, knew we’d have to stop and look. They knew my specifications regarding size, lip, and handle. It became the Holy Grail for me. I did eventually find one at Barnes and Noble.

It’s important for me to acknowledge that going without lids is dicey. I’ve spilled my fair share in the car. Just ask Cindy. (For the record, I now use lids when I’m in her car.) But see, we can’t go through life living cautiously, always afraid of what might happen.

You of Little Faith

Jesus told his followers that we’d have troubles in this world, that we should expect them. Of course, he was talking about the persecution that comes with sharing the gospel. But he said that despite the troubles, he would be with us through the end. I like to imagine Jesus in a coffeehouse saying, “O you of little faith, drink it up. I came to give you life and life to the full. Don’t put a lid on your cup for safety. Live dangerously. Don’t play by the rules man invented. Throw up your arms and scream with joy on this roller coaster of life. Dance like nobody’s watching.”

(Wow, Jesus sure likes to mix up his metaphors. He was always one for a good parable or two.)

So I encourage … no, I EXHORT you to lose the lid. You almost always burn your tongue using those things anyway. And that’s no way to live life—with a burnt tongue.

One thought on “Devil May Care”