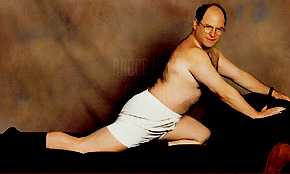 My second post on topics ranging from holidays to the glory of a woman’s hair (and a man’s if it looks good!) to the pregnant girl who sat in front of me in senior English class.

I didn’t mention in my post on Wednesday that I’m looking at the gospel writer Luke’s account of the sinful woman who anointed Jesus’ feet (7:36-50). This woman had a reputation in town, and everyone in the room seemed to know it but Jesus—or so it would seem.

There’s a hilarious episode of Seinfeld called “The Outing,” where a reporter mistakes Jerry and George as a gay couple.

Jerry: Y’know I hear that all the time.
Elaine: Hear what?
Jerry: That I’m gay. People think I’m gay.
Elaine: Yeah, you know people ask me that about you, too.
Jerry: Yeah, ‘cuz I’m single, I’m thin and I’m neat.
Elaine: And you get along well with women.
George: I guess that leaves me in the clear…

For me it started in elementary school. I remember specifically being in the boy’s restroom when an incredulous classmate walked in and asked if I was a girl. “Uh, well, I am in the boy’s room. And I was just standing over there at that urinal.” It must have been my small frame and long lashes.

In 7th grade a girl called me “Makeup” because she was convinced I wore mascara. “Hey, Makeup, how was your weekend? Can I borrow a pencil, Makeup?” Gina, who became a good friend of my sister’s, is a Facebook friend now.

Arrogant people smear me with lies, but in truth I obey your commandments with all my heart. —Psalm 119:69 NLT

Send in the Clowns

This was all pretty harmless until college. Toward the end of high school I met a guy who served as a waiter at a nice restaurant where I’d started playing piano. We struck up a partnership to play some gigs primarily at RV resorts for snowbirds. To that point, I guess I’d never really known anyone who was gay, so the obvious (and stereotypical) qualities went over my head. I should have realized that most guys don’t like Patti Labelle and Bette Middler or see Barbra Streisand as a personal hero. Also, most guys don’t sing show tunes for old people and paint their face onstage while singing “Send in the Clowns,” which I think was actually a cool effect.

I didn’t realize any of this, and my worst mistake was moving out of my parent’s house into his two-bedroom condo for a few months. I didn’t know it then, but apparently rumors started swirling. If I’d liked wrestling and hunting and NASCAR, maybe no one would have thought anything different. But I was me: an artsy musician with mascara eyes like Adam Lambert, though I never dressed or sang like he did, nor was my disposition like his.

I never really cared what people thought about me, for I was relatively confident in my strengths and talents. But it came to a head when Cindy and I started dating in college. I didn’t know that at the time friends of hers were concerned because of what they’d heard about me. (I hadn’t even heard what other people had heard.) Despite the rumors, Cindy decided to get to know me and, if she hadn’t been already, became convinced the rumors were lies. And she fell in love with my eyes.

Sometimes rumors aren’t lies, though. Sometimes the juicy details are, in fact, true. Sometimes we can’t hide the truth.

Too much talk leads to sin. Be sensible and keep your mouth shut.
—Proverbs 10:19 NLT

I recall a girl who sat in front of me in English class my senior year. She was an interesting one, rather beautiful and somewhat mysterious, not what you’d call a bad girl necessarily. Though we’d known each other in choir, she was rather sullen toward me, which she later attributed to morning sickness. (It was first hour.) We all watched as her belly swelled with the child she carried, which was somewhat uncommon in high school fifteen years ago.

Funny … sad actually, that pregnant teens are singled out, when you could say they’re really the only ones that get caught. This was the case with the woman who washed Jesus’ feet with her tears and dried them with her hair. Her reputation preceded her, but she rose above her shame and met her Savior and worshiped.

What about you? Has anyone ever maligned you? Or, perhaps like the sinful woman, has your dreadful reputation been warranted? Does it really matter what other people think?

As long as you have to guard your reputation, you are the slave of anyone who chooses to lie about you. —Wayne Jacobsen (He Loves Me!)

I’d love to hear back from you. Comment using a profile or anonymously.