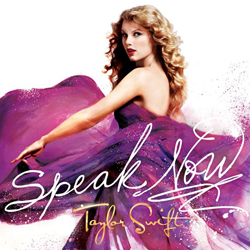 I purchased and downloaded Taylor Swift’s new album Speak Now for our girls. Among Jacque’s favorite songs are “Love Story” and “Our Song,” so I thought she in particular would enjoy it. The more they played it, though, the more I was drawn to it.

Let’s get this out of the way: Taylor Swift has the reputation of being a product of the studio, that she’s terrible live. I tweeted during the Grammys that she should give all her awards to her recording engineers.

If I had a little sister, I’d want her voice to sound like Taylor Swift’s: all lilty and sweet with that cute accent. Though she may struggle with pitch in a live setting—something a hundred vocal takes and some creative engineering can fix—she sounds like she’s learning to sing. At times she resembles the Michelle Branch I loved, before she started trying to sing country. Funny, Branch wants to sing country, while Swift is crossing over to pop.

I’m not a big fan of country music, but Speak Now isn’t necessarily country. And it’s definitely worth buying.

For those interested, here’s a rundown of the tracks:

1. Mine – Surely this is the new country, not all blues and loss, not like it’s “a quarter after one and I’m all alone” (see track 3).

2. Sparks Fly – The guitars, not to mention the drums, that open this song epitomize the shift in the country sound over the past decade, sounding a lot more like the style I like to play. Michelle Branch could have sung this song with the wonderful melodies in the chorus and wouldn’t have been as shaky on the bridge.

3. Back to December – Speaking of Lady Antebellum (see track 1), this sounds like one of their songs, partly due to the older male backing vocals, which mature her sound throughout the album. (A duet with Justin Bieber would have turned me off.) The lyrics here reveal a Taylor Swift who isn’t just a victim of the taunting of cheerleaders and preppy girls or an older man’s games (more on that), but one who regrets the hurt she caused: “And when the cold came, the dark days / When fear crept into my mind / You gave me all your love and all I gave you was goodbye.”

4. Speak Now – She sounds like Leigh Nash of Sixpence None the Richer on this one, with a lot of melodic movement that she struggles with at times. I assume she has chased the guy, who she says belongs with her, all the way to the altar, trying to break up his wedding with the cheer captain wearing a dress “shaped like a pastry.” (See track 10.)

5. Dear John – If I was her big brother, I’d want to beat up John Mayer for playing her the way she says he did. She slams him in this bluesy 6/8 song, which sounds like something he could have written and guest appeared on. It’s said that imitation is the highest form of flattery. Take your backhanded compliment, Mr. Mayer.

6. Mean – Living well is the best revenge, so they say, at least that’s Swift’s plan. She revisits this theme and others. Her lyric content gets repetitive, but how much living has a teenager lived?

7. The Story of Us – Though lyrically it’s all Taylor Swift, this is the kind of song I wish Katy Perry had continued singing but that she moved away from on her awful, sophomore set.

8. Never Grow Up – Oh, Taylor, don’t grow up yourself. You might disappoint with your adult endeavors, like Debbie Gibson or Tiffany. I love the simplicity of the acoustic guitar and vocals on this one. She sounds shaky, but it sounds intentional—as in her producer intentionally left it shaky. Here her maturity as a vocalist is coming through, as the emotion drives her singing. Lyrically, this might be her most grown-up effort. As a dad, this one gets me:

Take pictures in your mind of your childhood room
Memorize what it sounded like when your dad gets home
Remember the footsteps, remember the words said
And all your little brother’s favorite songs
I just realized everything I have is someday gonna be gone

9. Enchanted – Another song Michelle Branch could have sung, though Swift does so quite enchantingly. Her producers let the guitar solo a little longer than the usual too-short offerings.

10. Better Than Revenge – Avril Lavigne may have appeared on this song; it sounds so much like her. I didn’t include this on the CD I burned for our girls because of this line: “She’s not a saint and she’s not what you think, she’s an actress / She’s better known for the things that she does on the mattress.” Not appropriate for our tweeners, though I applaud the originality of the rhyme.

11. Innocent – I love the chord changes and her haunting (oh, that’s another song) melody. I wish the bass guitar would follow the line down instead of up, however. I love hearing a southern girl say firefly. Piano might have made its first appearance here on track 11. Dynamically, this song runs the gamut, from soft to loud, subdued to intense—great arrangement.

13. Last Kiss – Reminisces of Stevie Nicks on the bridge, though thankfully not the memories of Swift’s awful performance with Nicks at the Grammys earlier this year.

14. Long Live – A fantastic ending track, it sounds like the end of a feel-good movie, which is mostly what her music is: feel-good.

Speak Now is great music for our girls and arranging and production that continues to interest me. Now, cue up John Mayer’s latest. Maybe there’s another side to the story.

What do you think of Speak Now? Any favorite new music?